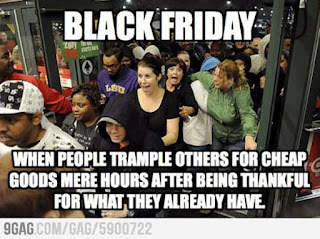 Cops: Mass. bargain-hunter took home TV, left 2-year-old boy behind - U.S. News
アメリカでは、Thanksgivingの休日の次の日にどこの店でも大クリスマスセールが始まります。一年の中では一番のセールです。皆はとても安い商品を得るために、その日の日の出の前に大勢の人が並んでいます。一方では毎年ニュースによるとこのセールのせいで悪いこともあるようです。
Questions....
1. When is the biggest shopping day in Japan?
2. Do you think you would enjoy Black Friday?

Today in the U.S. is a holiday called Thanksgiving. It first started when the first people came to America from England. They were called Pilgrims and lived in a town called Plymouth, Massachusetts. The Pilgrims were happy because of the good harvest, and they had a special celebration to say thanks to God. This celebration became the Thanksgiving holiday.
When I was a child, I remember my mother making food for Thanksgiving Day. Even though Thanksgiving is always on the fourth Thursday in November, many people start cooking on Monday. People like to eat turkey, yams, sweet potato, baked potato, cranberries, stuffing, and pies! My mother would always make three or four different kinds of pies for Thanksgiving! Everything she made was delicious! Because Thanksgiving is on a Thursday, people usually take off from work on Friday so they can have a four-day weekend. People gather with their family and friends and have dinner together. Before eating, someone says a prayer to thank God for all the good things in their life.

理解check!
1. Where did Thanksgiving start?
2. When is Thanksgiving?
3. What do people do on Thanksgiving?
ボーナス
What is the difference between turkey and chicken?
What is the prayer called that people say before eating?
投稿者 John Matsushima 時刻: 20:00 0 件のコメント: 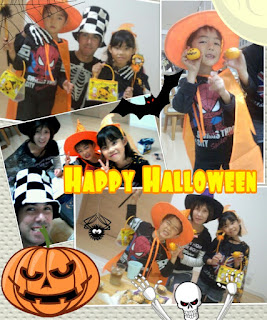 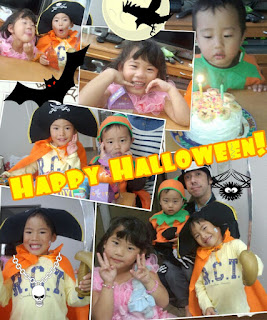 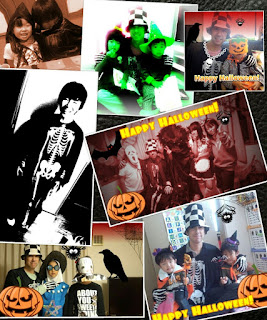 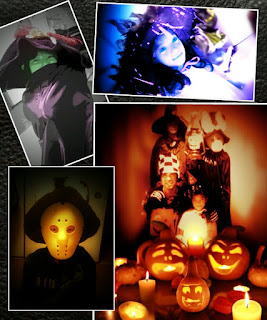 This year, I had a great Halloween! Starting from one week before Halloween, I had a little party during the lesson for each of my students. Many of them wore costumes, and were really scary! I played scary music while we played games and then I gave out candy to everyone who said "trick-or-treat". It was so much fun, and now I can't wait for Christmas!