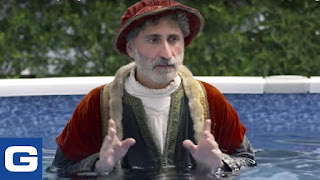 The following is something that one of my student's wrote. I changed it a little bit. Her English is very nice, and the story is very interesting.
*******
Student's essay:

Where does the name "Japan" come from, and what does it mean? Nihon is said to mean "The land of the rising sun", but how about JAPAN? It's not a Japanese word, after all!

Mr. John gave me this homework.  I googled it before coming to class, and this is what I found; I don't know if it is correct or not.

It is said that "Japan" is actually a Chinese pronunciation of Nihon. Chinese people pronounced it as "Jipun".  When Marco Polo heard this, he passed it on as "Zipan" (sounds like ジパン). Over the years, this became the modern pronunciation that we know today, "Japan".